At the annual Conference of the Society of Women Engineers (SWE), Gwynne E. Shotwell, SpaceX President and COO, took part in an opening keynote and conversation with SWE President Elizabeth Bierman. Shotwell, IL G ’86, joined SpaceX in 2002 as its seventh employee. Today, she manages the daily operations of a $5 billion company with 3,000 people on its payroll, all working towards the ultimate goal of facilitating life on other planets.

Watch the video here as the pair discuss the state of women in engineering, the search for work-life balance, advice for tomorrow’s women engineers, and what working in the aerospace industry is really like behind the glamor of space travel. 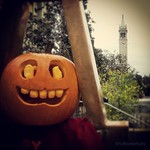 The above image was posted to the official University of California, Berkeley photostream. The caption reads “A post-#CALoween #myucberkeley by @tufthunterfusty of the decorated Tau Beta Pi ‘Bent’ between Bechtel and McLaughlin. #ucberkeley #campanile #sathertower #taubetapi.” This is the bent monument on the campus of the California Alpha Chapter of Tau Beta Pi.

Michael T. Alsbury was killed last week when a Virgin Galactic spaceship that he was co-piloting broke apart mid-flight above California’s Mojave Desert. Alsbury, 39, was an experienced test pilot and a flight engineer at Scaled Composites. In a published article related to the crash, Alsbury, CA M ’97, one of his co-workers described him as, “I consider Mike Alsbury the renaissance man,” said Brian Binnie, another test pilot who worked at Scaled Composites for 14 years before leaving the company in February. “He could do it all. He was an engineer. He was a pilot. He worked well with others. He had a great sense of humor. I never heard him raise his voice or lose his cool.” Read more about Mike from Space.com