The University of Mississippi recently profiled James M. Robinson II, MS B 2016, a senior general engineering major. According to the news story, Robinson decided to pursue engineering because of his love for mathematics and science. He has been involved in a research initiative “Heads in the Game.” The interdisciplinary STEM education program works with high school students, promotes concussion awareness and education, and teaches biomedical engineering and neurology.

Robinson served as an instructor during the program and has continued concussion monitoring while conducting undergraduate research. He has presented his research at several national conferences and won the Student Presentation Award at the IEEE Conference. His future plans included attending medical school after taking time to work in the biomedical engineering industry.

The Barry Goldwater Scholarship and Excellence in Education Foundation recently announced the 2016-17 Goldwater Scholars. This year 252 scholarships were awarded to undergraduate sophomores and juniors based on academic merit in mathematics, science, and engineering. A total of 1,150 students were nominated by college and university faculty in the Unites States. Read the press release here and see the full list of 2016 Goldwater Scholars.

Congratulations to the 31 Tau Beta Pi members that were awarded Goldwater scholarships. Click here for the list of Tau Bate 2016 Goldwater Scholars.

On Monday, March 28, the Connecticut Alpha Chapter of Tau Beta Pi, at Yale University hosted its spring initiation ceremony. Four new members of Tau Beta Pi were inducted. They are Danielle K. Stamer, CT A 2017; Tanya Y. Shi, CT A 2017; Jiou Yu, CT A 2016; and Jonathan Chang, CT A 2016. The image below was published on the Yale School of Engineering & Applied Science website. 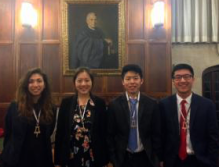