The 83rd class of Tau Beta Pi Fellows from 2016-17 has submitted their Fellowship reports of their year of graduate study. Click here to read the 24 reports on the TBP website. Each of the fellowship recipients expressed appreciation to their supporters, TBP donors, and the Fellowship board.

The 84th class of TBP Fellows was recently announced. Read the press release and see the electronic listing of this year’s 25 recipients.

On Sunday, April 30, the Texas Delta Chapter of Tau Beta Pi hosted its spring initiation. TBP Executive Director Curt Gomulinski, MI E ’01, was in the area this weekend for an alumni chapter installation and was able to attend the TX Delta initiation. See the image below of Curt with a bent monument on the campus of Texas A&M University. 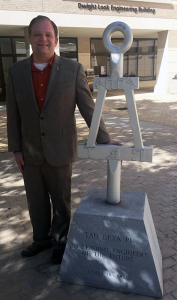 The school newspaper of Embry-Riddle Aeronautical University (Prescott, AZ), The Horizons, tweeted an image of the Bent monument on the Arizona campus over the weekend. The image below (left) is the Bent monument of the Arizona Delta Chapter of Tau Beta Pi. The second image below (right) was tweeted by a recently initiated member of the California Theta Chapter of Tau Beta Pi at California State, Long Beach. 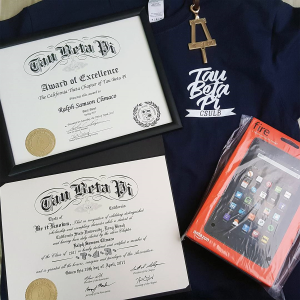