Thank you to everyone that made this such a great 2018 Tau Beta Pi Day! Many chapters have upcoming events planned for March and event into April. In the next weeks, this blog will highlight as many of the great TBPi Day activities as possible. In addition, be on the lookout for the annual #TauBetaPiDay video summary.

The Tennessee Epsilon Chapter at the University of Memphis hosted “Pie a Professor Day.” The image above is from the event and includes College of Engineering Dean (middle) Richard J. Sweigard, Ph.D., P.E. (TN E ’75). Photo courtesy of Aaron Alexander, TN E 2019. 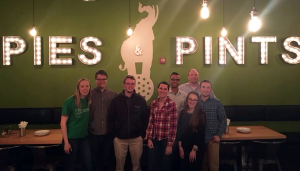 The TBP Dayton Alumni Chapter celebrated #TauBetaPiDay with a social at Pies and Pints. The above image was posted by Dayton AC president Morgan M. Highlander, OH M ’16, who said, “What a great group and a fun event!”

The Tribune-Star (IN) reported on a Pi Day event hosted by the Indiana Beta Chapter at Rose-Hulman Institute of Technology. The event included “Pie a Professor” to raise money for Happiness Bag, a non-profit organization that provides services and programs for children and adults with mental and physical disabilities.

The image above was taken by Tribune-Star/Joseph C. Garza and shows associate professor of mechanical engineering Michael S. Moorhead, NY P ’98, after getting “pied.”