Michigan State University (MSU) Dean, College of Engineering, Leo C. Kempel, Ph.D. (OH B ’89), recently presented a recognition for Tau Beta Pi to Michigan Alpha Chief Advisor Katy L. Colbry, Ph.D. (MI A ’99), honoring the MI Alpha chapter for 125+ years of recognizing engineering excellence at MSU. The chapter was installed in 1892 and is the second oldest TBP chapter in the country. See the image below from SpartanEngineer. 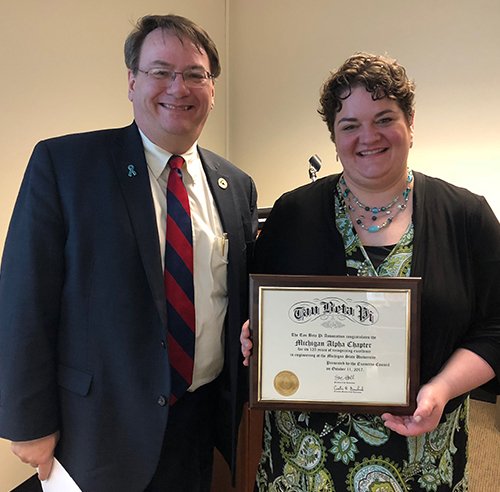 In addition, the third oldest TBP Chapter, Indiana Alpha (at Purdue University) will celebrate its 125th anniversary on April 10.

Mark B. Rober, UT B ’04, was a guest on Jimmy Kimmel Live! last week to share ideas for Easter/April Fools’ Day pranks. Rober is a former NASA engineer and now has more than 2.5 million subscribers to his YouTube channel, “New Ideas Science Design.” Watch the segment below.

The Naval Sea Systems Command announced that Shawn M. Schneider, OH A ’06, has won the 2018 Department of the Navy Award for Technical Excellence at a Test and Evaluation Facility or Range, Naval Surface Warfare Center Dahlgren Division.

He was honored for his extraordinary scientific and engineering contributions to the test and evaluation community in the area of multi-input-multi-output (MIMO) vibration test profiles. Schneider “was honored for his sustained leadership and steadfast direction that have been, and continue to be instrumental in transforming DoD standards for executing vibration testing in compliance with strict military specifications.”