On April 25, the Indiana Gamma Chapter at the University of Notre Dame hosted its spring initiation. TBP District 8 Director Tom Schaub, NY N ’93, was on hand to welcome the new members. He posted several images, including below, of the new members to the TBP D8 Facebook group. 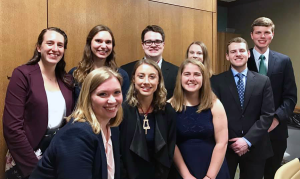 The Barry Goldwater Scholarship and Excellence in Education Foundation recently announced the 2019-20 Goldwater Scholars. This year 496 scholarships were awarded to undergraduate sophomores and juniors based on academic merit in mathematics, science, and engineering. The increases is thanks to a partnership with the Department of Defense National Defense Education Programs (NDEP).

The University of Kansas (KU) School of Engineering will honor two alumni with the Distinguished Engineering Service Award this week. This is the highest honor bestowed by the school, annually since 1980.

One of this year’s awardees is David Ross, KS A ’73, who has guided one of the most prominent and successful construction firms in the Kansas City area as president and owner of David E. Ross Construction. He earned his bachelor’s in civil engineering from KU. Click here to read the announcement for more information.